How far can we push the boundaries of student-centred learning? This is the question the AIF-funded Bilingual Open Educational Resources project at Glendon asked as it embarked on an ambitious research and creation project to develop three digital learning modules centered around intercultural competence, plurilingual communication, and academic and informational literacy to support the creation of Glendon’s Bilingual Certificate in Civic and Social Stewardship. What is the difference between this project’s development process and more traditional ones? These modules were designed from start to finish entirely by students.

Born out of the needs identified by a previous AIF project also under the supervision of Professor Dominique Scheffel-Dunand, the module themes are applicable across a wide range of academic and non-academic contexts including in the classroom, in Globally Networked Learning environments and for students adapting to new academic contexts such as international students and those studying abroad. One of the key strengths of the project is the diversity of the coordination team: doctoral, masters and undergraduate students, Experiential Education leads and professors. “But the greatest part is that these module activities have been designed entirely by students, for students. Who better to identify the needs of students on exchange than those currently living the experience,” explained Liam Bekirsky, Research Assistant for Bilingual. 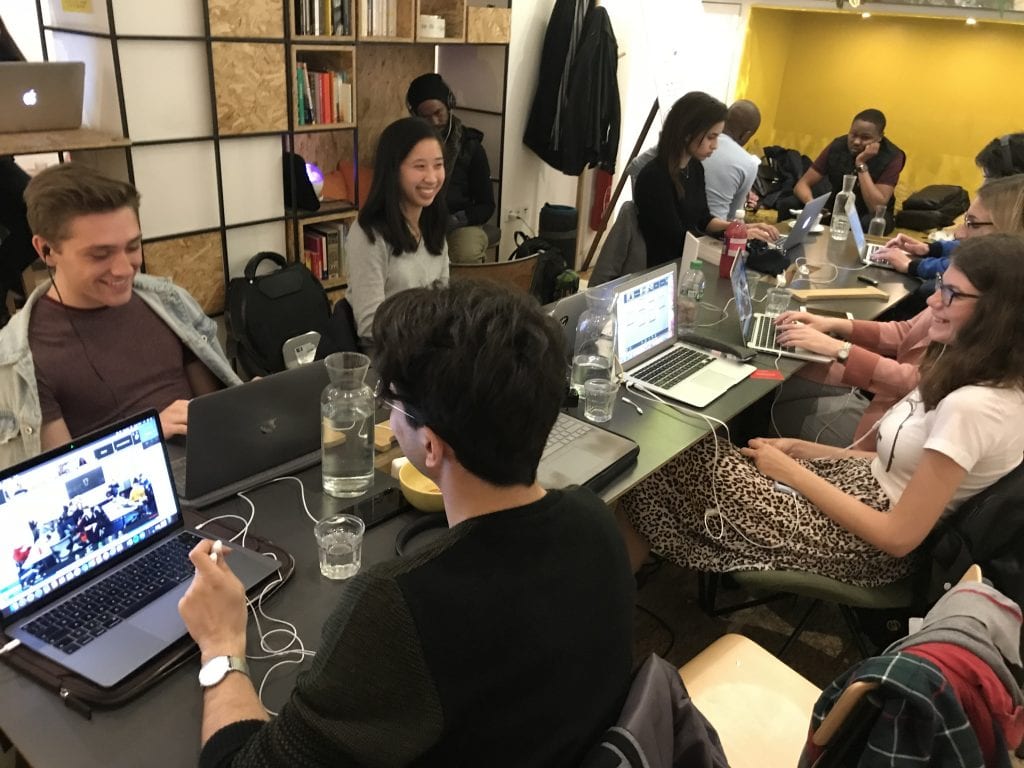 Glendon exchange students participating in the Transnational Ideathon in March 2019 from Paris, France.

One of the pedagogical approaches adopted by the project was to run Ideathons, playing on the hackathon approach, but engaging liberal arts students from diverse linguistic and academic backgrounds. Glendon students, along with French exchange students, led by Laura Waddell and Agnès Lemesre-Valy, connected online with their peers, Glendon students on exchange in France who were led by Bekirsky, to work transnationally to design activities that would support students like them trying to integrate into an unfamiliar academic culture. Challenged to reflect on the question of whether academic culture was universal, the transnational teams, comprised of the 24 student participants, connected through Zoom and Google Apps @ York technologies, and developed over 30 activities through open pedagogy over the course of a weekend in March 2019.

The diversity of student experiences was crucial to their success, the participating students confided, since it brought them new ways of thinking about and exploring the challenge. Quickly understanding that academic culture was very different in France and Canada, the students were able to articulate those differences and challenges and turn them into concrete activities for students and instructors, including a tool for helping student researchers to work with multilingual resources and an innovative pen pal activity through vlogging that encouraged students to reflect on various aspects of academic culture before their study abroad. “Part of the challenge and value of the exercise was for students to articulate these challenges, tackling them head on, and thus reflecting on their learning,” explained Professor Scheffel-Dunand. 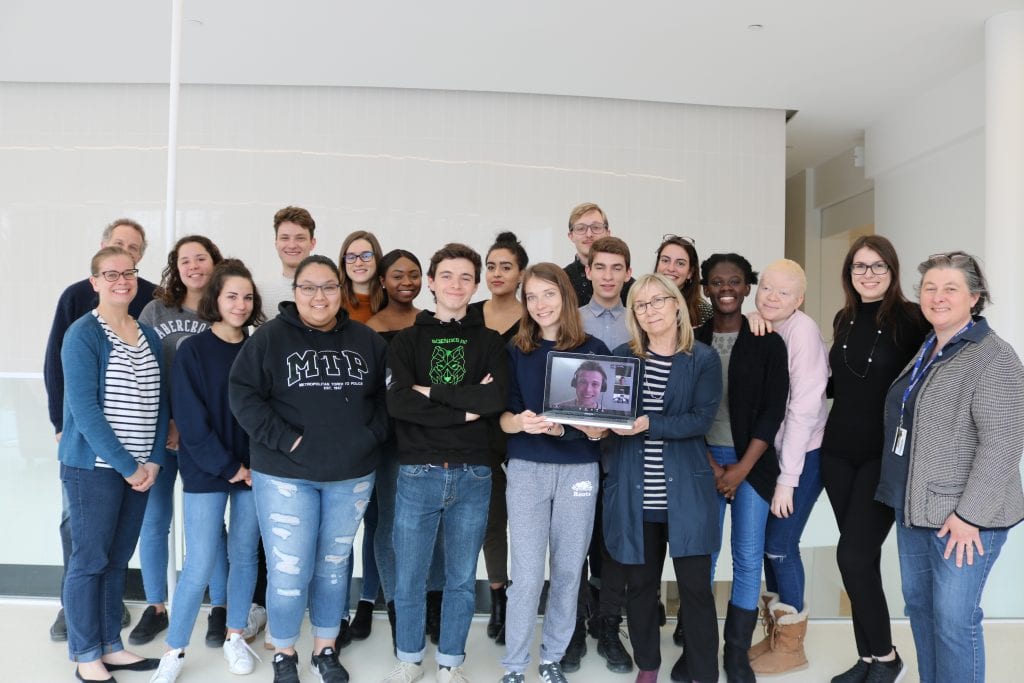 Interdisciplinary partnerships for learning and problem-solving

The translation of the ideas from the Ideathon into concrete learning activities came next. Laura Waddell, Agnès Lemesre-Valy, and Liam Bekirsky, along with Professor Franz Newland, from Lassonde, facilitated York’s first cross-faculty Creathon in May 2019, which brought together engineering and computer science students with liberal arts students. The goal of the creative hackathon was for the engineering students to translate the liberal arts students’ ideas into usable software prototypes that stayed true to the objectives of the activity conceptors – who then became the product owners. Some of the prototypes and activities were developed over the summer and are now available for use on the project’s website. Others will be developed over the course of the 2019-2020 academic year through the C4:Cross-Campus Capstone Classroom at York University.

“The goal,” explained Professor Scheffel-Dunand, “is for these cross-disciplinary resources to be available for all actors within the York University community, as well as to Glendon’s institutional partners in France and Africa.” Since the resources are Open Educational Resources, they can be adopted and adapted for many purposes, which is the main idea behind open pedagogy and involves reusing, retaining, redistributing, revising and remixing OER.

Changing role of the instructor

“Part of using open pedagogy involves redefining not just the role of the student but also that of the instructor. We were facilitators for the process,” explained Laura Waddell, Research Assistant for Bilingual, “which means that we outlined the main objectives and product expectations and helped design a process, but the how and what was left up to the students. We set up the template for the final product and overall work methodology, but the content, design and creative process were left entirely to the students. Of course we also provided feedback at check-ins along the way, which was made possible through collaborative technologies like Google Docs, as they allowed us to make comments on students’ work from halfway across the globe.”

“This is about putting the student at the centre,” explained Professor Scheffel-Dunand. “Working in open pedagogy doesn’t mean the instructor has no role, it just means that that role has changed. Now they are a guide, a mentor, as students take control of their learning through the creative problem-solving process.” “In a sense, it’s a form of co-authorship, and the role of the facilitators is to help the students feel confident to take on their new role as creators” added Agnès Lemesre-Valy, Experiential Education Coordinator at Glendon, who is also a core member of the project team. 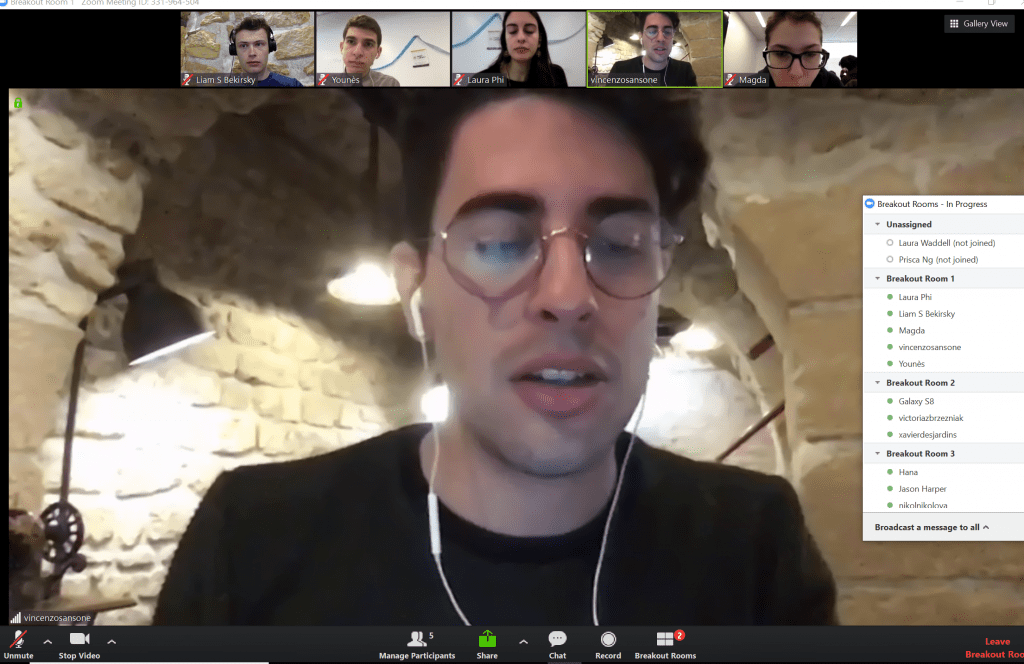 Glendon exchange students participating in the Transnational Ideathon in March 2019 from Paris, France.

A role for machine learning

So what are the next steps for the project? While some of the resources conceptualized during the 2018-19 year will be developed this year through the C4 course, the next step is to build a learning community of users around the use and appropriation of these resources. Having secured new AIF funding for 2019-2020, Professor Scheffel-Dunand explained that machine learning can play a role in this. “While it won’t be able to create and design resources, machine learning will be able to assist users in this process, by improving the way users search through the OER in the repository and identify resources that could be pertinent for their needs.” The 2019-2020 AIF also involves the development of three new modules on the themes of governance, digital thinking and information dissemination and digital literacy. In October 2019 the research team presented the products of their work (OER) at the Global AFS Intercultural conference in Montreal to bring new partners onboard to use the resources, and in November 2019 they held their first Ideathon for the 2019-2020 project.

If you are interested in any of these themes, or have interest in other aspects of the project, feel free to reach out to Professor Scheffel-Dunand, AIF Project Supervisor, at dsdunand@glendon.yorku.ca.