Please note: Students must complete an internship with a duration varying between 1 to 3 months between May and August to be eligible for funding from York International.

This internship is for students interested in learning on how to run a development NGO operating in the field, as opposed to working on one of our projects in particular. During their time in Lobitos they will get involved in all types of activities which keep our organisation moving forward. We are always in need of interns/volunteers who will help us run our organization, given that we are involved in so many different initiatives and find ourselves thinly stretched as a result. The intern will work side by side with the organizations leadership team to drive forward many operational initiatives and will also have the chance to get directly involved in any of the ongoing projects.

Ongoing day to day activities include but are not limited to the following initiatives/projects. Interns/volunteers will be able to take part in several of these activities listed below (depending on their skills) once they have been accepted into our programme.

There is no specific set of hard skills needed. The roles and responsibilities that will be given to the intern during their time will depend on the hard skills they have (i.e. If an intern has strong graphic design skills, they will be able to get involved with the marketing and social media team and assist in the development of graphic material for projects and the organization as a whole).

2. Reforestation and Conservation in Northern Peru

Together with our partners from Columbus Zoo & Aquarium (Ohio, USA), SOS Peruvian Plantcutter and Ecológica Tallán, we are building the first stage of a biodiversity conservation project in Lobitos and its surroundings.

We are looking for a conservationist intern for this new project which started in April 2017 and ongoing and scaling. The project concerns the conservation of an endemic and endangered species of bird, the Peruvian Plantcutter (Phytotoma raimondii), of which only 500-1000 individuals are estimated to be left alive, as well as the propagation of native tree species like the “Palo Negro” (Grabowskia boerhaviifolia – vulnerable) and the “Algarrobo” or carob tree (Prosopis pallida – endangered). The district of Lobitos and its surrounding natural areas are one of the last major habitats for the bird and its native dry forest is severely degraded.

This project will benefit the community by building conservation conscience, among its members and key stakeholders, regarding the Peruvian Plantcutter, native species like the Algarrobo and Palo Negro and the dry forest ecosystem in general.

Through this project, the community will also be empowered on how to grow seedlings of the most threatened and important vegetation species of the dry forest and on how to propagate them through innovative reforestation techniques of degraded dry forest areas, recovering habitat for endangered species of birds.

The long-term aim is for the project to evolve into a community-led ecotourism venture where locals are trained and have the knowledge to guide tourists and birdwatchers into the surroundings of Lobitos where they can spot the Peruvian Plantcutter and other rare endemic birds while making an alternative income.

Despite being primarily focused on the Reforestation and Conservation project, the intern will have exposure and the ability to participate in all of EcoSwell’s ongoing projects. That being said, some of the specific tasks for the market research include (but are not limited to):

Early in 2016, we installed a state-of-the-art photovoltaic energy system at the Community Hall of the Lobitos Artisanal Fishermen’s Association, as one of the objectives after a successful crowdfunding campaign. The setup is made up of two solar panels of 600W (300W each), four maintenance-free deep cycle use rechargeable batteries of 12V and 100Ah (20 hours) and a smart multi-function inverter/charger of 2.4kW and 24/220V.

This system is currently powering the Community Hall in the middle of the Primavera neighbourhood, the main fishermen’s neighbourhood in Lobitos. In this way the Community Hall has turned into a centre where the inhabitants can access free, clean and renewable energy, especially during the occasional blackouts from the grid in Lobitos. It has also reduced the Fishermen Association’s electric bill, greatly reducing their operating costs and generating important savings for the organization. However, the installed system can handle up to 2.4kW of load and it is currently running with idle capacity (only 10-20% of power is used). This project can keep improving and there are several activities in which the intern could get involved in.

We have also begun a Wind Energy project to supply energy to the Lobitos Medical Post that experiences constant blackouts that are detrimental to the vaccinations they have. Currently they have lost several vaccines due to this and have no reliable alternative solution.

• What impact(s) or benefits (upon the local community or environment) does this project have?

The main proportion of inhabitants in Lobitos are fishermen or belong to fishermen families. Their income largely depends on their artisanal fishing activity. The idea of having this renewable energy setup at their Community Hall is to strengthen the Fishermen Association so that they can be more productive/efficient and add more economic value to their local fish catch, instead of just selling it right away to market middlemen as they catch it.

Despite being primarily focused on the Renewable Energy project, the intern will have exposure and the ability to participate in all of EcoSwell’s ongoing projects. That being said, some of the specific tasks for the renewable energy include (but are not limited to):

EcoSwell has a very comfortable and equipped house in a central neighbourhood of the town and receives volunteers from around the world all throughout the year. The house has comfortable private/shared rooms, private/shared bathrooms, full kitchen with healthy food options, common leisure areas, running water, reliable electricity, fast internet connection and all the office equipment necessary for students to carry out their internship. If the students prefer to stay and eat outside the EcoSwell house, the organization can assist them in finding something appropriate. If this option is chosen, EcoSwell will not be responsible for any inconveniences with the accommodation or food. Information on costs can be found at http://www.ecoswell.org/volunteer-contribution.html

How to Apply: http://www.ecoswell.org/apply.html (indicate York University in application) 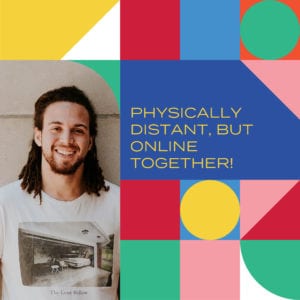 Looking to connect with members of the YorkU community? Join us for our Virtual Coffee Breaks! It's an online space for international and domestic students from across programs, Faculties, countries, and cultures to connect and[...]
May
29
Fri
2020
12:30 pm Applying for PGWP
Applying for PGWP
May 29 @ 12:30 pm – 2:00 pm 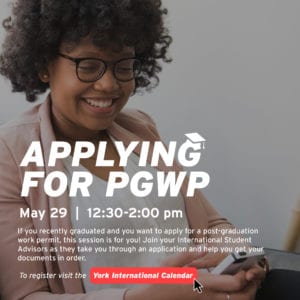 Looking to connect with members of the YorkU community? Join us for our Virtual Coffee Breaks! It's an online space for international and domestic students from across programs, Faculties, countries, and cultures to connect and[...]
Jun
17
Wed
2020
9:00 am Writing Thesis Statements - Virt...
Writing Thesis Statements - Virt...
Jun 17 @ 9:00 am – 10:00 am

A good thesis statement is expected for most papers you will write here at York. But clear, practical advice for writing an effective, clear sentence or two about your paper’s argument can be hard to[...]
View Calendar
Add